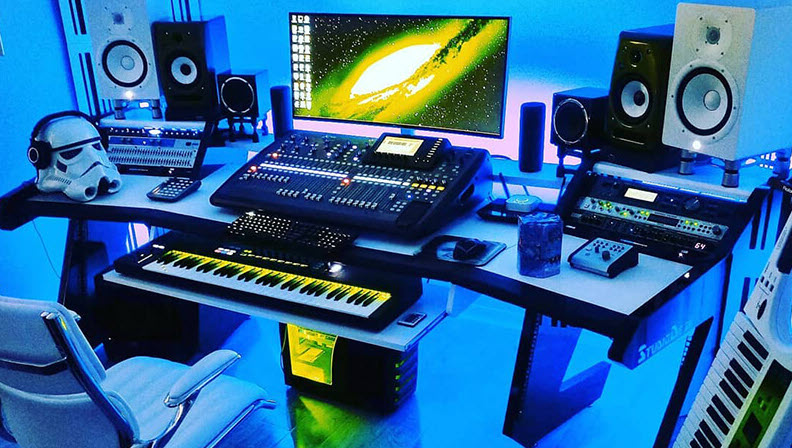 For the last couple of years I’ve been recording guitar work for a talented Virginia-based singer/songwriter/musician, Erin Reilly. Erin is a music educator and has a degree in music from Shenandoah Conservatory/Shenandoah University. Ironically, Shenandoah was where I was planning to pursue my education in music after I graduated High School in NY, but that’s a whole other story.

Her song writing is a unique fusion of different styles. Her arrangements are sophisticated, musically progressive and her lyrics are well-written and gospel-centered. Her Christian convictions come through strong and clear in her songs. The purposeful delivery of the Gospel message in her music is a priority to her, which is the main reason I became interested in contributing my guitar work. I share those same convictions regarding faith and music which makes it easy for me to help her with my musical contributions.

A Fun but Musically Challenging work

Because there is a fairly high level of sophistication and complexity in Erin’s music, it’s been both fun and challenging for me to work with her. The fact that she is able to provide me with charts of her compositions in actual musical notation, rather than guitar tab, is another reason I like working with Erin on her songs. I prefer to read music than read guitar tab. Some of the artist I’ve contributed guitar work only send me the demo and I have to spend time charting out the music by ear, which slows the process and stifles the creativity by creating more work for me.

I’ve originally heard some of Erin’s jazz-styled music in a social media forum for Christian musicians and songwriters. But it turned out that she also writes in an edgy rock style mixing lush jazz harmonies in her instrumental arrangements along with rich background vocals. The need for having a “live” edgy rock guitar sound in her songs, rather than a synthetically-created sound done with her keyboards, was the reason that she asked for my help. Unbeknownst to her, the guitar stylings she was looking for in her music were styles that I haven’t played for many years and I’ve had to get reacquainted with playing like that. I’ve generally straddled the fence between (mostly) jazz and some mild rock playing with a strong emphasis in blues. Erin’s songs required heavy rock guitar and grungy stylings. Fortunately, I have the guitars and equipment to produce those sounds and also I didn’t have to dig very far to be able to pull it out of myself – but it did take a little bit of practice.

Below are the songs written by Erin that I’ve contributed guitar work. They are represented by 2 versions or mixes. The audios are my personal working versions of my guitar work. The videos are Erin’s final finished versions which she has released in both audio as well as video versions. You’ll really appreciate her talent as a composer, instrumentalist and singer in her versions. Check both versions out as they’ll give you a glimpse of her music from 2 different musical angles. One thing you’ll see about her song videos is that she’s also talented in video production as well. They are really well done. I’ve also included links at the bottom if you’d like to hear more of Erin’s other songs and/or purchase them for download.

Below are the individual recording mixes of my guitar work on her songs. They feature Erin’s vocals and instrumental playing but the guitars are predominant in the recordings and come across more edgier and aggressive because of that. To listen to all of the songs in a complete playlist, you can listen to them here.

Planted by the Waters – Jazz Funk

Below, I’ve included the YouTube videos of Erin’s 2 albums that I recorded with her. The individual lyric videos of the full production of these songs can be found on her YouTube channel (link provided below). These final mixes are less focused on the guitar work and are the completed productions that showcase her excellent vocal and instrumental work. Her capabilities really shines through on these mixes. She’s also quite talented in producing the video work on these songs. Her song messages are timeless.

Check out the following links to her other songs, which are excellent. Also consider making a financial contribution to support her art on Patreon below.