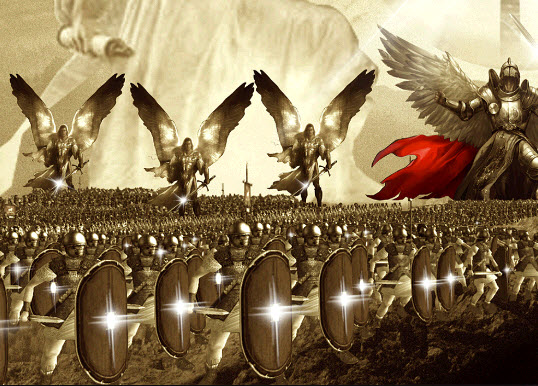 Description: “Triumphant Kingdom” is a tune that I wrote and arranged in a jazz/rock fusion vein. I had recruited my friend, Italian multi-instrumentalist, Giorgio Finetti to play the violin part on this tune.

I was going after something that sounded epic in it’s mood. I was trying to capture, in a musical sense, the age old conflict between good and evil, God and the rebellion in Heaven against Him by fallen angels. The instrumentation was written to create the mood of elevated pride, arrogance, and a war-like chaotic aggression in the harmonic structure, horn arrangement and electric guitar solos versus the sense of holiness, righteousness, goodness and purity demonstrated by the strings/violin and the Spanish guitar work. The end of the piece ends with a Heavenly chord ringing out to demonstrate the Triumph of God and His Kingdom. The message is that good will ultimately triumph over evil. The ultimate victory was gained in the crucifixion and resurrection of our Lord Jesus Christ through which His blood was shed for the forgiveness of our sins and those who come to faith in Christ have a new life through accepting Him and identifying with His resurrection.

Origin of the Song Concept

The past couple of years I’ve been reading through a series of books written as a a dramatic biblical saga by author and screenwriter Brian Godawa called “The Chronicles of the Nephilim” (8 books) and “The Chronicles of the Apocalypse” (4 books) depicting the unseen conflict and the war over the souls of humanity. The books read like “The Lord of the Rings” and would be a treat for anyone who likes that genre of literature. Godawa drew his inspiration from, a book by biblical scholar Dr. Michael Heiser. Heiser’s book is called “The Unseen Realm”, which I also read. I include some details below about the books.

Additional inspiration came from the scriptures for my song portraying this “cosmic chess match” between the 2 rival kingdoms, God and the fallen ones. The verses below paint the picture and are not the only ones but they are the key ones. If you read them like you’re reading a novel, you’ll see the picture develop:

These were the words that God spoke over the deceiving Fallen One and Adam and Eve in the Garden. This foretold of the rivalry that would play out in history.

Genesis 6:2-5
“the sons of God (angelic beings) saw that the daughters of men were fair; and they took to wife such of them as they chose. Then the Lord said, “My spirit shall not abide in man for ever, for he is flesh, but his days shall be a hundred and twenty years”. The Nephilim (giants) were on the earth in those days, and also afterward, when the sons of God came in to the daughters of men, and they bore children to them (hybrids). These were the mighty men that were of old, the men of renown. The Lord saw that the wickedness of man was great in the earth, and that every imagination of the thoughts of his heart was only evil continually.”

Isaiah 14:12-14
How you have fallen from heaven, morning star, son of the dawn! You have been cast down to the earth, you who once laid low the nations! You said in your heart, “I will ascend to the heavens; I will raise my throne above the stars of God; I will sit enthroned on the mount of assembly, on the utmost heights of the North. I will ascend above the tops of the clouds; I will make myself like the Most High.”

Ezekiel 28:13-17
You were in Eden, the garden of God. … I ordained and anointed you as the mighty angelic guardian. You had access to the holy mountain of God and walked among the stones of fire. “You were blameless in all you did from the day you were created until the day evil was found in you. … and you sinned. So I banished you in disgrace from the mountain of God. I expelled you, O mighty guardian, from your place among the stones of fire. Your heart was filled with pride because of all your beauty. Your wisdom was corrupted by your love of splendor. So I threw you to the ground.

John 10:10
“The thief (Satan) comes only to steal and kill and destroy; I (Jesus) have come that they may have life, and have it to the full.”

John 3:16 & 17
“For God so loved the world that he gave his one and only Son, that whoever believes in him shall not perish but have eternal life. For God did not send his Son into the world to condemn the world, but to save the world through him.”

2 Corinthians 11:14
“Satan himself masquerades as an angel of light.”

1 John 5:19
“We know that we are children of God, and that the whole world is under the control of the evil one.”

Revelation 12:7-11
“Then war broke out in heaven. Michael and his angels fought against the dragon, and the dragon and his angels fought back. But he was not strong enough, and they lost their place in heaven. The great dragon was hurled down—that ancient serpent called the devil, or Satan, who leads the whole world astray. He was hurled to the earth, and his angels with him. Then I heard a loud voice in heaven say: “Now have come the salvation and the power and the kingdom of our God, and the authority of his Messiah. For the accuser of our brothers and sisters, who accuses them before our God day and night, has been hurled down. They triumphed over him by the blood of the Lamb and by the word of their testimony.”

← Through the Veil
The Gospel Hymn Project: I Have Decided to Follow Jesus →